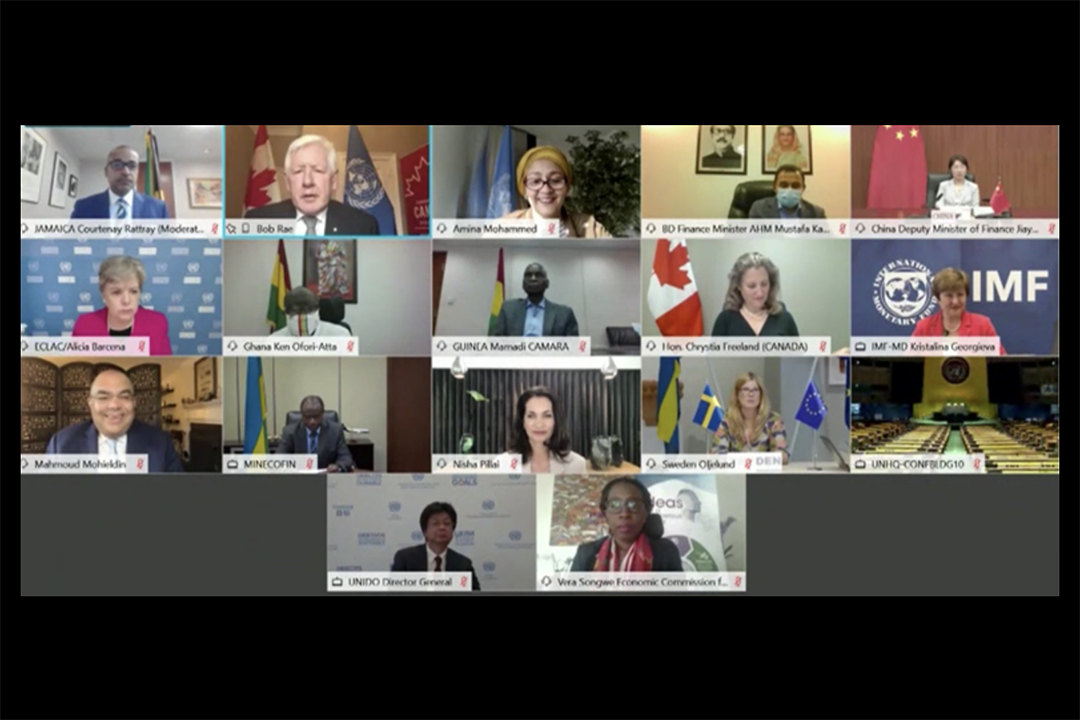 A group of finance ministers have prepared a menu of policy options to recover from the COVID-19 crisis and mobilize the financial resources needed to achieve the 2030 Agenda. Heads of state and government will review the political menu during the meeting. ‘a high-level event on September 29, 2020.

Speakers explained that developing countries are bearing the brunt of the pandemic in many ways. As Ghana’s finance minister said, the pandemic’s effects on Africa are “not a passing frigate, but a… dislocation of at least three years”.

Among the examples given:

The September 8, 2020 meeting was called by United Nations Deputy Secretary-General Amina Mohammed and the finance ministers of Canada and Jamaica. Opening the meeting, the two convening ministers stressed the need for a multilateral response to the pandemic and the associated economic crisis. Chrystia Freeland, Minister of Finance of Canada, has acknowledged that the least developed countries (LDCs) feel the effects most, due to lack of resources to adopt stimulus measures. Nigel Clarke, Jamaica’s finance minister, said the need for a global response to the pandemic has only increased as its center of gravity has shifted to developing countries.

International officials then highlighted the economic trends resulting from the pandemic, three priorities for policymakers and the menu of policy options. The Managing Director of the International Monetary Fund (IMF), Kristalina Georgieva, said countries with weaker economic fundamentals suffer more from COVID-19, as do people with pre-existing conditions. She said countries that already had high debt levels are in dire straits and tourism-dependent economies “are on their knees.” The priorities are now to: maintain support for these countries until their economy has fully recovered; extend the Debt Service Suspension Initiative (DSSI) for one year; and investing in education, digital capacity, human capital, health systems and social protection.

Members of six focus groups presented the main findings of their work in June, July and August 2020, which generated the menu of policy options. For the group on external financing, remittances, jobs and inclusive growth (Group 1), Japan said the G20 and the Paris Club have agreed to extend the DSSI and called for private sector funding. China has announced that it is actively considering expanding DSSI. Egypt has supported debt-for-equity swaps to finance investments related to the SDGs.

On better recover for sustainability (Group 2), the European Commissioner for Crisis Management underlined the need for a “green, digital, fair and resilient” recovery. Related policy options would support strong health systems, resource-efficient growth, and an open and secure digital society. He said this requires both public and private investment to fully align with the Paris Agreement and the SDGs. Rwanda said that in addition to an expanded DSSI, developing countries also need: adjustments to DSSI conditions, debt restructuring, a replenished IDA 20 and access to zero-cost financial markets. “This is the roadmap” for better recovery.

The UK said countries’ stimulus plans should incorporate updated and improved climate NDCs, and they should align spending with the Paris Agreement. The UK will host the Glasgow Climate Change Conference in November 2021 (UNFCCC COP 26).

The United Nations Development Program (UNDP) has said digitization can help mobilize finance and is a lifeline in this crisis. The International Development Finance Club (IDFC) said that public development banks (PDBs) can help bridge the gap between the SDGs, the Paris Agreement and local policies, and give us a boost to growth between APD and stakeholders. The IDFC has announced that it will host the “Common Finance Summit” on November 12, 2020, the first global meeting for all PDBs.

On global liquidity and financial stability (Group 3), Costa Rica has announced a $ 1 trillion fund proposal to support emerging and poor countries with concessional loans for the impacts of COVID-19. The World Bank has echoed the importance of concessionality. Ghana said the SDR system should be expanded. He cited a “catastrophe waiting to happen [in 2021] as countries start to default.

France and the World Bank have indicated their support for the extension of the DSSI. The World Bank added that greater private sector participation is needed.

The Maldives have proposed a tourism fund to step up testing at airports to restore confidence in global travel. The United Nations Economic Commission for Africa (ECA) has recommended a liquidity and sustainability facility to lower debt service payment rates.

The United States said the G20 and Paris Club may consider other measures in 2021, depending on countries’ actions in the interim, such as improving public financial management and guiding policies. investments in projects that enhance economic growth).

The United Nations Economic Commission for Latin America and the Caribbean (ECLAC) called for a climate change debt swap to create a Caribbean resilience fund, which would require 12% of total public debt (USD 7 billion ).

The Organization for Economic Co-operation and Development (OECD) has said that the consequences of COVID-19 for developing countries – hunger, famine and poverty – will make its health consequences very low.

Finally, on illicit financial flows (FFI) (Group 6), Nigeria called for mutual legal assistance to remove obstacles to international cooperation. The Financial Action Task Force (FATAF) has reported that the pandemic has been used to generate illicit funds, which are now flowing out of developing countries just when health services need it most. The solution is to implement FATAF standards, he suggested.

Oxfam endorsed the recommendation to support the Addis Tax Initiative (ATI) 2020 mandate and called for a United Nations tax treaty to tackle tax havens, tax abuse and other IFFs.

The ministers’ meeting will be followed by a meeting of heads of state and government on September 29 to discuss policy options, and a series of thematic and regional meetings from October to December.