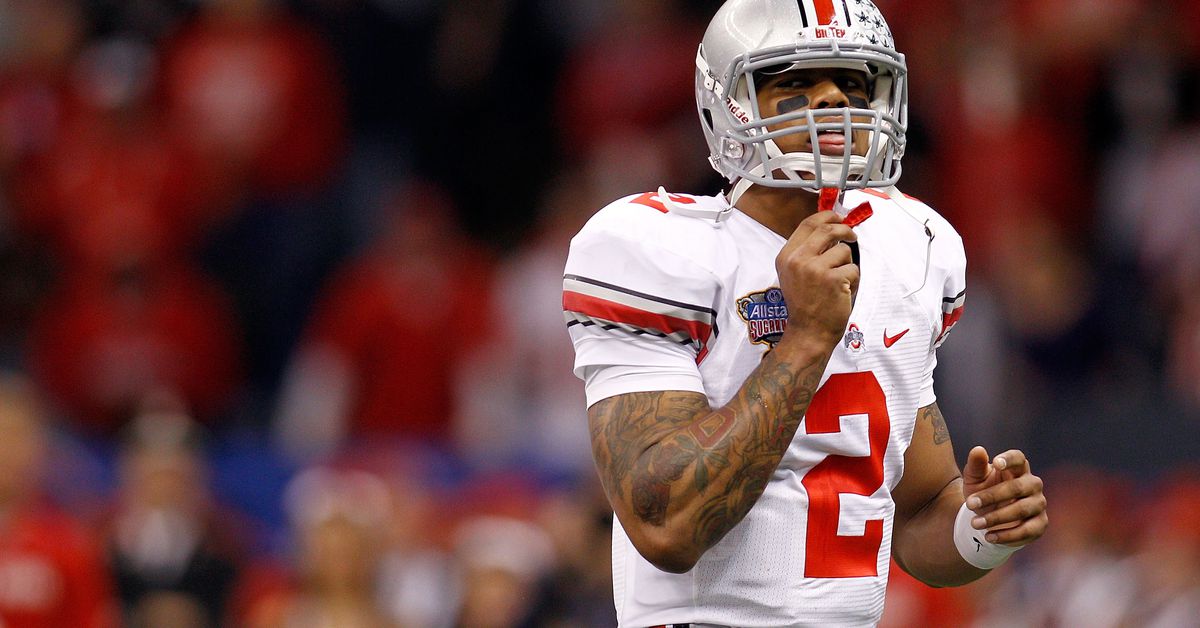 With NIL regulations coming into effect this week, it is time for the canceled victories of the 2010 season to be reinstated. We all saw the Buckeyes go 12-1 that season and beat Arkansas in the Sugar Bowl. The record books tell a different story, however, as Ohio State goes 0-1 in 2010, with the only game counted being a loss to Wisconsin.

I fully understand that at the time what the players and Ohio State head coach Jim Tressel did was against NCAA rules. Terrelle Pryor, Dan Herron, DeVier Posey and others signed autographs in exchange for tattoos, as well as selling memorabilia given to them by the university. Tressel was aware of these violations and did not report them to the NCAA. Tressel ended up resigning his position as head coach.

After a little over a decade, it became even more evident how much of a joke the punishments were. Now gamers can become a ‘bar stool athlete’ or shill for College Hunks Hauling Junk, but swapping your ink on a photo for ink on your body a decade ago is still seemingly a no-no. . Want to sell those gold pants you won in the field? Better to think twice.

I know the biggest problem with the whole “scandal” was Jim Tressel lying to Ohio State and the NCAA about what he knew. Let’s not pretend that college coaches haven’t claimed ignorance on more serious matters since then. Bobby Petrino hired his mistress and gave her $ 20,000, and we probably only found out because he crashed his motorcycle while they were riding. Petrino was fired from Arkansas, but he’s sort of coached at three schools since then.

Now, if Joe Paterno can grab 111 wins, there’s no reason Ohio State can’t return him 12 2010 wins. Paterno knowingly employed Jerry Sandusky, who sexually abused children, and did nothing to stop Sandusky even when confronted with the concerns of many others over the years. Instead, I guess because Paterno was a senile old man, he gets the benefit of the doubt.

Aside from the Michigan game and the Sugar Bowl, it’s not even really about restoring wins. What I just don’t want to see is Tressel, Pryor and others vilified for their actions. While everything was technically illegal in the eyes of the NCAA at the time, it is now normal for players to take advantage of their name, image and likeness. Really, the Buckeyes were just ahead of the curve.

What was the hardest thing that came out of “Tatgate” was that Terrelle Pryor didn’t really get the recognition he deserved from the university. All Pryor did in his three years at Columbus was lead the Buckeyes to three BCS bowls, winning two of them. Before Justin Fields, there could be an argument for Pryor to be the best quarterback in school history. It would be interesting to see how things would have turned out if Pryor hadn’t been suspended before the 2011 season and instead decided to take part in the NFL Extra Draft.

One of the biggest â€œWhat if? In college football could be what would have happened if there had been NIL regulations in place ten years ago. Ohio State lost six games in 2011 by seven points or less. The Buckeyes were a shell of what they could have been, as they started Joe Bauserman to open the season before eventually handing over the starting quarterback to Braxton Miller. Had Pryor and Tressel been back in 2011, it’s quite possible the Buckeyes could have fought for a national title. Ohio State could also hold a 16-game winning streak against Michigan right now.

It’s not that the Buckeyes were severely upset by the “scandal”, as they then hired Urban Meyer and won a national title. In fact, “Tatgate” might be one of the best things to ever happen to Ohio State as weird as it sounds, because who knows how long Tressel stays at Ohio State, how the recruiting goes and who takes over after. that “The Sweatervest” decides to retire. It just shouldn’t be a mark on the legacy of Tressel, Pryor and everyone involved anymore.