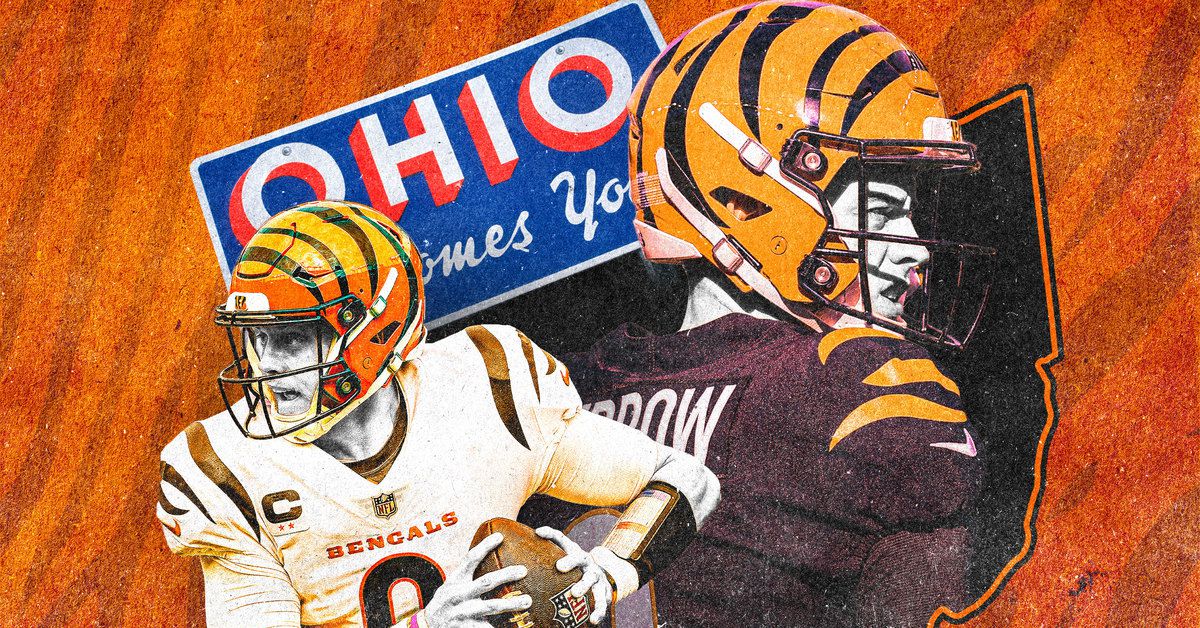 Nathan White lives about half a mile from Athens High School. The Ohio native was named head coach at his alma mater in 2019 after serving as offensive coordinator for a few seasons. After watching the Cincinnati Bengals upset the Kansas City Chiefs a few weeks ago, one of White’s former coaches called him out. The pair met at the Athens football ground, Joe Burrow Stadium, and then began ringing the victory bell to commemorate the venue’s namesake.

“While we were there, there were maybe 100 cars going by, honking their horns,” White said. The ring. “There are fireworks all over the city at nine o’clock at night. To say this place is excited is an understatement.”

Athens is proud of Burrow’s success. His victories are their victories. His success is their success. He remains loyal to them, showing pride in his house.

“Well, they helped make me who I am today,” Burrow said of the Athens community this week. “I wouldn’t be here without all the people who supported me in Athens. I am still in touch with many of these people and try to help the area in any way I can. I hope I make everyone proud.

Burrow was born in Ames, Iowa, but “the only thing I remember about Ames is the big pillar in my basement. We had a Little Tikes basketball hoop there. He moved to Athens in 2005, when he was 8 years old. “Calling it a city is a bit of a stretch,” White joked.

Athens is not used to this kind of success. 2018 Census estimates found Athens County’s overall poverty rate to be the highest in Ohio (30.6%, according to Cleveland.com), which is part of why Burrow called out the area in his 2019 Heisman Trophy acceptance speech. “There are so many people who don’t have much,” Burrow said. “I’m here for all those kids in Athens and Athens County who come home with little food on the table, hungry after school. You could be here too.

Burrow always believed he had the potential to be on that stage that night. His confidence is coupled with a sense of loyalty to those who have seen his rise from small-town high school quarterback to four-star college freshman to mainstream transfer to Heisman winner and now, finally, Super Bowl starter. .

Sam Vander Ven and Adam Luehrman have known Burrow since they were in third grade. They still talk, and during the season, Burrow sometimes catches up with them during games of rocket league, EA Sports FIFA, Haloand Grand Theft Auto. The foundations of their friendships were built while playing on the Athens Sandlot All-Star Teams together. (Vander Ven remembers Burrow as a “fast center back” who was “a very, very, very good baseball player.”)

“I think he was less vocal back then,” Vander Ven said. “He was more of an example then. But growing up, he took over a major college football program, he took over an NFL franchise, that’s when you have to get more vocal. His confidence and swagger are contagious to a team.

The Burrow legend took off in high school. As a sophomore, Burrow became the starting quarterback for Athens. White, then the offensive coordinator, had implemented a new no-huddle, paced offensive scheme that was easy for everyone but the quarterback.

“We kind of put a lot on his plate,” White said. “Really, it was all about our quarterback to allow us to play well and understand what other people are doing. And you’re going with a sophomore and… I don’t know if worried is the word, but you’re definitely throwing a lot at him for his first high school start.

But on his first start, Burrow performed like he’d exploited the system for years, throwing three touchdowns. “That’s more important to me than his physical abilities,” White said. “Obviously he could throw it very well. He was a great athlete. But just his mastery of the game after that very first, it was just something you don’t see a lot of seniors in high school, let alone a kid starting their first game at age 15.

Burrow only got better from there. He led the Bulldogs to three league titles and a state championship appearance as a senior. Luehrman played tight end and had over 1,000 career receiving yards before finally playing at Ohio University. Vander Ven played receiver and racked up more than 800 yards in two college seasons. They marvel at the talent and competitiveness of these Athens teams.

“I think we’ve embodied our area pretty well,” Vander Ven said. “It’s a pretty deprived and gravelly area. We weren’t the biggest, we weren’t the strongest, but we were the most competitive group of kids you could imagine. And we weren’t afraid of anyone and neither was he. And Joe was our leader behind that.

Unsurprisingly, there are plenty of stories surrounding Burrow’s confidence. White remembers the competitive seven-on-seven when Burrow talked trash while throwing touchdowns to junior varsity receivers against varsity defensemen. There was a playoff game when Burrow threw a pass and kicked it in the air, then caught it himself before razing a defender and scoring. Burrow’s childhood friends describe a child “confident, but not arrogant”. White described Burrow as having “calm, swaggering confidence”. This attitude quickly spread to the whole team.

“We had Joe,” Vander Ven said. “We had a hit against everyone.”

Athens’ memorable run in Burrow’s senior year ended with a loss in the state title game. That loss — his last in a postseason game — still bothers Burrow today. His success earned him a scholarship to Ohio State after then-Buckeyes assistant Tom Herman unexpectedly identified him. Herman told Urban Meyer “I found your next Alex Smith.” Burrow, however, never had a chance in Columbus. His move to LSU gave him the opportunity to start. Before his senior year, when Joe Brady was named the Tigers’ passing game coordinator, White recalled that Burrow seemed a little more excited about the season than usual.

“He doesn’t usually do the ‘get excited’ thing,” White said. “It’s just like another day at work. But this spring and summer, you could tell he was pretty excited. Like, ‘Coach, I think we’re going to be really good. This offense is completely different.

The rest is history. Burrow had one of the most prolific seasons in college football history. Red Stick kissed transferring Ohio State as one of their own. And through it all, he never seemed fazed by his success or the attention that came with it.

“I think he’s the most laid back person under pressure I’ve ever seen,” Vander Ven said. whether it’s the national championship, whether it’s Week 2 against Rice. No one inspires confidence in anyone – an entire team – like Joe does.

Earlier this week, Rams player Odell Beckham Jr. did his best to make sense of Burrow’s appeal. He said Burrow “is going to be one of the greatest,” but it wasn’t the highest honor Beckham — an LSU alumnus — bestowed on Burrow.

“If you look up ‘cool’ in the dictionary,” Beckham said, “there’s a picture of [Joe] with some Cartier shades.

There are no statistics that quantify the belief that someone can instill in another human being. That’s part of why Burrow is so fascinating: Those who’ve spent time with him know he’s got the “it” factor. Wherever Burrow had a real chance, results followed. It’s as strong a testament to his ability to change culture as anything else. Change, however, can only be fully experienced when those in the building believe in it and are willing to embrace it. Bengals offensive coordinator Brian Callahan notes how Burrow’s emotional intelligence allows him to connect with people from different walks of life.

“Joe plays a huge role in [setting the tone] and he’s the one who brings it to life,” Callahan said. “The quarterback should be the guy who carries the message and brings it to life for the team. And we’re lucky to have a lot of guys in there who feel the same and work the same. So that makes his job really easy when it comes to that. I think the best run teams in this league and in all sports are player run teams.

“I think what separates the teams at the top is the trust and the relationships you build in that locker room that will eventually come true on the pitch,” Burrow said. “And we have great people like that, who work really hard to build those relationships within the organization.”

No doctrine exists that requires quarterbacks to be the emotional leaders of their teams, but they are almost exclusively by default because no position has such a significant impact on the outcome of football games. “Quarterback is the only position that can really impact the game every game,” Burrow said. “So I’m really enjoying that part. And the second part is just cultivating relationships in the locker room.

Callahan explained that “it’s hard to quantify how we’ve improved” other than explaining that “a bunch of guys bought in to try and be the best”. It’s a cliché to suggest that intangible qualities like leadership and confidence can make such a tangible difference, but that’s exactly how the members of the Bengals sum up their run. Callahan said agency and player leadership is “a huge part and I think that’s a big reason why” the Bengals surprisingly won the AFC.

“When things go your way, your quarterback is the driver, your messenger if he’s that type of player — they’re not all like that. But Joe sure is,” Callahan said. And he’s the guy who takes the message and applies it in the locker room and we were lucky to be surrounded by a group of guys who think the same thing in attack and defense. And so it’s really easy for these guys to deliver the message and stay focused and work the way we work because they’re a like-minded group of people from all sides of the ball, and Joe is definitely the one of the engines. ”

Burrow’s infectious personality has heightened excitement in his home country. Rapper Kid Cudi – who Burrow grew up listening to – shouted Burrow and received the Bengals QB game jersey from the AFC Championship game. After the AFC Championship game, Akron native LeBron James tweeted a photo de Burrow smoking his victory cigar with LSU. Former Bengals star AJ Green even show Support. But perhaps no Ohio native was more excited about Burrow’s rise than Luehrman, who was one of the only Bengals fans in their growing up friend group.

“I think back to right after the Bengals last playoff appearance in 2015,” Luehrman said. “I was like, ‘How are the Bengals ever going to be decent or be able to compete again?’ All it took was just one of your best friends to play QB for them I guess.