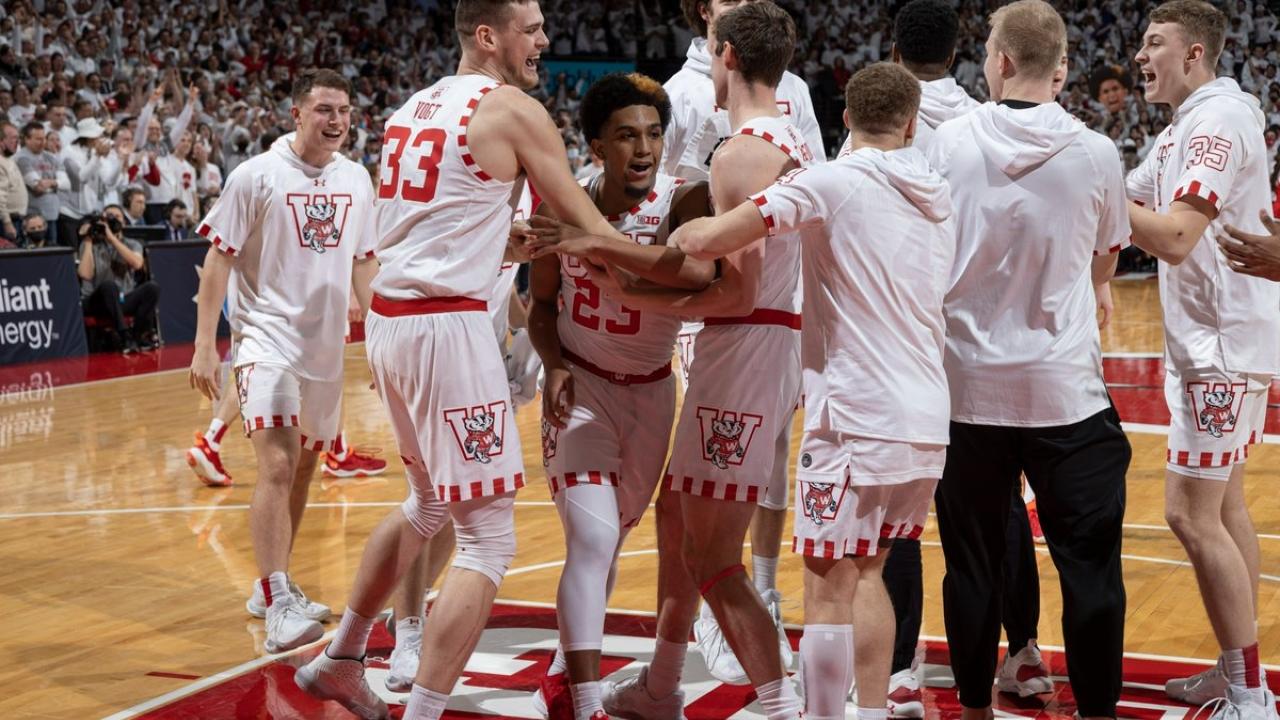 In men’s hoops on Tuesday night, 12 AP Top 25 teams competed in action, including three head-to-head matchups. With the conference standings getting tighter by the day, every win and every loss counts a little more as the playoffs approach.

Here’s what happened on Tuesday:

The No. 10 Badgers clinched a share of the Big Ten regular-season championship in a wild 70-67 win over No. 8 Purdue in Madison. The Kohl Center erupted into a frenzy when Chucky Hepburn cashed in that three-pointer to take the decisive lead just seconds after Jadyn Ivey tied it at 67.

Ladies and gentlemen, we offer you @ChuckyHepburn!!!

When time finally ran out, pandemonium swept the field as the Badgers celebrated.

WHAT A NIGHT. WELCOME TO MARCH, @BADGERMBB NATION! pic.twitter.com/QIHGIJlIYP

Hepburn’s spectacular three-pointer capped a 17-point night for him in tandem with 19 points from Tyler Wahl and another 16 for Jonathan Davis.

The Badgers wrap up their regular season against Nebraska on Sunday while the Boilermakers wrap up against Indiana on Saturday.

No. 11 Villanova earns win over No. 9 Providence

The No. 11 Villanova Wildcats finished a season sweep of the ninth-ranked Providence Friars with a 76-74 win at home on Tuesday night.

Villanova was led by 20 points from guard Caleb Daniels and three more in double digits. Despite shooting just 40.4% from the field and 33% from deep, they won the game by excelling in two facets: free throwing and protecting the ball.

The Wildcats scored 21 points on the line to Providence’s nine and turned the ball over just five times in the entire game, eleven fewer than their opponents.

The Finneran Pavilion crowd rocked the arena all night, and it’s easy to see why when the team pulls out dunks like this:

Providence was without second-leading scorer Al Durham, who average the most minutes in the team. He missed the game due to what head coach Ed Cooley called a “serious injury”, apparently a sports hernia. The team was also without senior guard AJ Reeves, another player who averages double-digit scoring.

While that won’t change the fact that the Friars won the Big East regular season title, Villanova’s perfect record against Providence will likely give them a mental edge should the two meet in the conference tournament at Madison Square Garden. .

No. 23 Ohio State drops another conference game, upset by Nebraska

In the Big Ten, the No. 23 Ohio State Buckeyes were shocked at home 78-70 by a bottom-ranked Nebraska team. It’s their second consecutive conference loss, dropping them to fifth in the standings and threatening to cost them their conference tournament berth.

The Cornhuskers snapped a 24-game losing streak against the AP Top 25, earning their first victory against a ranked team since 2019. Nebraska has struggled this season, with just three conference wins to their name , so Tuesday’s surprise was certainly something to celebrate. .

THIS TEAM CONTINUES TO FIGHT. pic.twitter.com/jUailMwZWA

With only two conference games remaining, the Buckeyes need to change course quickly because this loss won’t look good on the team’s resume.

TCU makes history in upset win over No. 6 Kansas

In Fort Worth, TCU sent more shockwaves through the college hoops world with a 74-64 win over the No. 6 Kansas Jayhawks.

Just days after upsetting No. 9 Texas Tech, the back-to-back wins over the AP’s top 10 teams are a first in program history for TCU. With two resume-boosting wins in such quick succession, head coach Jamie Dixon couldn’t help but revel in the moment.

It was a relatively clean game as neither team turned the ball over more than eight times, but the shot was not there for the Jayhawks. They battled their way to a field goal percentage of 37.3%, led by Ochai Agbaji’s icy 4 of 17.

The result is Kansas’ second straight loss after another 10-point loss to Baylor on Feb. 26.

In a unique coincidence, the teams will meet again in less than 48 hours as the Frogs travel to Lawrence for a rematch Thursday at 7 p.m.