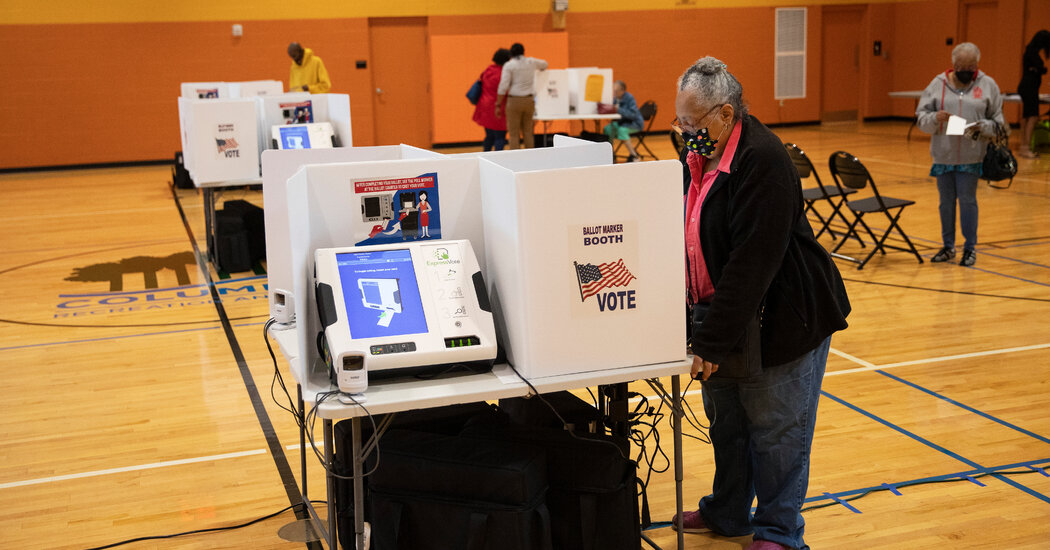 Theodore Roosevelt, a renowned political animal and polymath, once said, “I think there’s only one thing in the world I can’t understand, and that’s Ohio politics.

It is indeed a complicated place, shaped by its history as America’s first frontier state. Since the founding of the country, Ohio has been settled over the years by various ethnic groups seeking prosperity west of the Appalachians. Once a beacon of American politics, Ohio is losing that status as its population ages, becomes whiter, and more culturally conservative. But its patchwork of vastly different regions makes it a fascinating state to watch regardless.

“Ohio is one of those places whose story is more often told from the outside than the inside,” said David Giffels, author of “Barnstorming Ohio,” a book on political geography and culture of the state.

“We are the boring middle of American politics,” Giffels added. “And I mean that in a loving way.”

Ohio’s major population centers form a diagonal axis that crosses the state from Cleveland in the northeast through Columbus to Cincinnati in the southwest, along the I-71 corridor. There are as many as 12 media markets in the state, whose population of 11.8 million spans nearly 45,000 square miles.

As a result, said Kyle Kondik, an election forecaster and author of a book on Ohio politics, “there really isn’t a strong center for voting in the state.”

Ohio is holding a primary election on Tuesday that will give us the first major electoral test of Donald Trump’s influence over the Republican Party since he left office. By endorsing JD Vance in the state’s Republican Senate primary, Trump single-handedly propelled Mr. Vance, the famed venture capitalist and author, past a crowded field.

But Vance’s victory in the primary is not a certainty. Although the candidates have spent nearly $70 million bludgeoning each other on TV, voters don’t seem particularly keen on the possibility of choosing a replacement for retiring Sen. Rob Portman. Race attendance is expected to be low.

“With Trump not on the ballot, I don’t think this race is a priority for most voters,” said Thomas Sutton, director of the Community Research Institute at Baldwin Wallace University, which conducts polls among voters. Ohio voters.

That could help Matt Dolan, a mainstream Republican who is likely to have support from party regulars and high-income suburban voters. According to this theory, casual voters who might be swayed by Trump’s late endorsement of Vance are less likely to turn out.

Dolan’s allies also suggest that because the other candidates will split Trump’s hard-core vote among themselves, Dolan, a state senator whose family owns the Cleveland Guardians, has the opportunity to secure a plurality of votes by picking up more laid back Trump fans. They also speculate that Gov. Mike DeWine’s strength in the gubernatorial primary could lift Dolan among rank-and-file Republicans.

Mike Murphy, a former Republican consultant, said that because Dolan hadn’t been the subject of many attack ads, “he became the new face in the final moments after the others took a ton of damage. , both self-inflicted and from paid media.”

The five states of Ohio

Most Ohio analysts divide the state into five regions: the northeast, around Cleveland; To the northwest, including Toledo and the thriving farmlands that surround it; Central, up-and-coming areas in and around Columbus; To the southeast, the Appalachian part of the state; and the southwest, dominated by Cincinnati and its suburbs.

The Northeast is Ohio’s Democratic stronghold, the most populous, industrialized, and diverse part of the state. But it’s also home to tens of thousands of Republican voters, so the candidates have all campaigned and advertised heavily in the area.

The Southwest, which includes Vance’s hometown of Middletown, is the traditional center of Republican politics in Ohio. More southern in perspective, it is teeming with grassroots Republican voters: Conventional in their cultural outlook, they tend to favor free enterprise and worry about issues like crime, drugs and immigration. Vance, who now lives in Cincinnati, is hosting his election night in the city.

The Southeast has been a pivotal area in Ohio politics, although it is also the least diverse with nearly 95% white. Hampered by job losses and buffeted by the forces of globalization and economic modernization, with a lower percentage of people with college degrees, the Appalachian region of Ohio is teeming with “people who are angry against the world,” said John C. Green, the director emeritus. from the Bliss Institute at the University of Akron.

As a result, Green said, the region has a “much higher tolerance for the turbulence of politics” – and could gravitate around Josh Mandel, who campaigned as much on attitude as on particular conservative ideas. A Mandel-supporting super PAC ran ads on area rural radio stations attacking Vance as “a fraud”.

In the 2016 Republican presidential primary, the Ohio map split sharply between John Kasich, who was the incumbent governor at the time, and Trump, who would of course win the Republican nomination and the presidency. . Kasich won Ohio’s most populous counties en route to the state, while Trump mopped up Appalachian communities along the Ohio River.

A question on the minds of many Ohio watchers: How will college-educated Republicans respond to Vance?

Will they flock to the Yale-educated socialite lurking inside the angry MAGA warrior that Vance has become? Or will they be pushed back by how far he has moved to Trump’s base?

Vance’s schedule and ad spend in the final days of the race shows a focus on suburbs and small towns. Since Saturday, he has visited Circleville, a town south of Columbus; Cuyahoga Falls, a town north of Akron; Westlake, a suburb west of Cleveland; Dublin, a northwest suburb of Columbus; and Mason, a northeast suburb of Cincinnati.

A super PAC supporting Vance, Protect American Values, has spent heavily on television ads in Cleveland, Columbus and Cincinnati, as well as Dayton, Toledo and Youngstown.

“On the surface, it looks like the campaign is chasing middle Republican voters,” Green said.

It’s a deceptively conventional strategy one would hardly expect from the protagonist of ‘Hillbilly Elegy’ – a story of rural communities ravaged by poverty, drug addiction and what he has called ‘learned helplessness’. “. In 2016, Vance urged Americans to take charge of their own destiny, as he did in transcending his troubled childhood.

“We are no longer a country that believes in human agency, and as a formerly poor person I find that incredibly insulting,” he said in an interview.

In this campaign, Vance has courted support from far-right figures who peddle conspiracy theories and invective like Steve Bannon and Reps. Matt Gaetz and Marjorie Taylor Greene. In recent days, he has accused President Biden of deliberately flooding Ohio with fentanyl, a preposterous charge without evidence.

“In a way,” Giffels said, “he kind of sells the victimhood he railed against in the book.”

Manchin wades into a GOP primary in West Virginia

It’s not often you see a Democrat supporting a Republican candidate. But the usual political bets are off in West Virginia.

Republicans hold all three seats in the state House. But after West Virginia loses a district in the once-a-decade redistribution process, there’s only room for two of them in the next Congress. That left two Republican congressmen, Alex Mooney and David McKinley, battling it out for the new Second District.

Over the weekend, Sen. Joe Manchin, the nation’s most famous right-wing Democrat, announced in an ad that he was supporting McKinley, a longtime West Virginia politician and engineer by trade who was elected for the first time in Congress in 2010. The primary is May 10. .

The endorsement adds another layer to an incumbent versus incumbent race that has already become something of a proxy war. Donald Trump endorsed Mooney, while his former Secretary of State, Mike Pompeo, endorsed McKinley. Manchin joins Gov. Jim Justice — a Republican who left the Democratic Party after Trump’s election — in endorsing McKinley. Mooney, in particular, is seen as a potential Senate challenger for Manchin in 2024.

Mooney has a similar resume to McKinley, albeit across state lines. He spent a decade in the Maryland Legislature before leading his state Republican party, a story that provided McKinley with alliterative fodder in his attack ads against “Maryland Mooney.”

Both men campaign on typical Republican talking points, like immigration and gun rights. But they have devoted most of their TV ads to attacking each other, trading accusations of collaborating with Democrats and betraying Trump.

Perhaps twisting the knife for his Democratic critics, Manchin praised McKinley in his ad for rejecting what was once the centerpiece of President Biden’s social policy agenda — an agenda, of course, that has been condemned in part by Manchin’s opposition.

“For Alex Mooney and his out-of-state supporters to suggest that David McKinley supported Build Back Better is an outright lie,” Manchin told the camera.

Is there anything you think we’re missing? Something you want to see more? We would love to hear from you. Email us at [email protected].