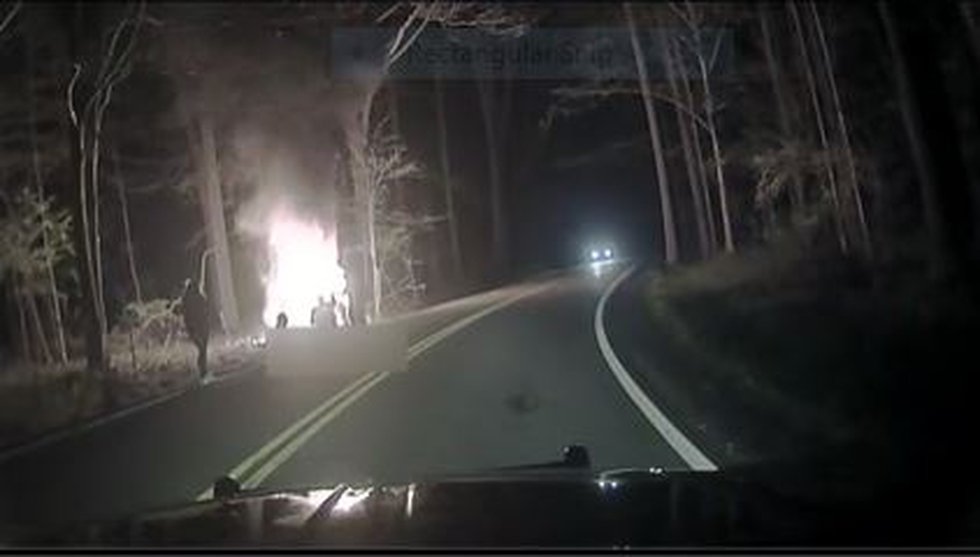 WESTLAKE, Ohio (WOIO) – A violent accident and a brave rescue as a vehicle with two teenagers inside crashes into a tree and then bursts into flames.

It happened Monday night inside the Bradley Woods Preserve in Westlake Metroparks.

Dramatic and jaw-dropping dash video obtained exclusively by 19 News from Westlake Police shows the vehicle on its side and engulfed in flames as Cleveland Metro Parks police and firefighters arrive. You can see a person lying on their back on the road, but they are clearly alert and able to move an arm and a leg.

During a 911 call for help, the dispatcher warns the caller not to move people stuck in the car,

but despite the warning, the Good Samaritan decides there is no time to waste. He pulls 16-year-old Emily Culkar, the passenger who was wearing a seatbelt, to safety, and that’s when the whole vehicle bursts into flames.

Emily Culkar now has a community that prays as she faces a long road to recovery. Michael Bookzam, owner of the North Ridge Racket and Paddle Club in North Ridgeville, is not only her boss, but also her friend: “She couldn’t get out of the vehicle, she couldn’t feel her legs anymore, she has her back broken. There was a fire. Someone stopped and managed to pull her out.

But the active teen, Avon Cheerleader and passionate snowboarder now needs the rallying cry of the community to support and lift her spirits: “She loved snowboarding and I imagine she needs psychological motivation to know that she will be able to do all those things again soon.

In a statement released by Emily’s family, they tell 19 News:

Emily’s parents, sisters and brothers would like to express our sincere thanks to all of our friends and family, as well as our extended families at Avon High School and North Ridge Racket and Paddle.

We are grateful for the huge outpouring of support.

To everyone who touched Emily this week, your hands have literally been hands of healing.

Starting with Cleveland Metro Parks Police, Westlake Fire and Police Force, St. John’s Westshore Hospital Emergency Personnel, Life Flight Staff and Pilot, and Nurses and UH Trauma and SICU doctors, we are in an unshakable state of awe and awe. Thank you.

But the biggest thank you, humble and indebted gratitude goes to the young Good Samaritan who ran into the flames and pulled our Emily out of that burning car. You are the real hero. Your selfless actions were incredibly pure and commendable. Thanks to your humanity, a certain tragedy has been averted and a loving family remains whole. Wherever you are, thank you for being Emily’s guardian angel.

We would also like to send healings and prayers to Emily’s friend, Hayden, who was in the car with her.

A prayer box has even been created by Emily’s boss, in hopes the community will send cards to her business in North Ridgeville or even come in and write messages. Words that can help heal and give the 16-year-old strength and a reason to smile again, Bookzam says: “I wish she had a lot to read while she recovers. “