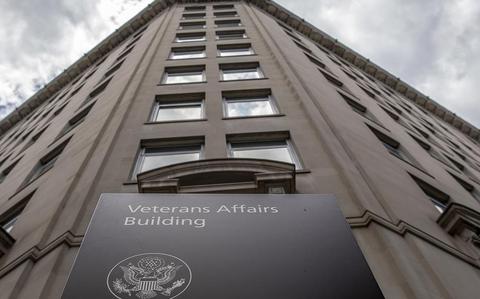 The Veterans Building in Washington, DC is shown in this undated file photo. (Carlos Bongioanni/Stars and Stripes)

WASHINGTON — A Department of Veterans Affairs plan that contains nearly $2 trillion in recommended closures, consolidations and upgrades of facilities across the country could be in jeopardy after 12 senators announced they oppose reassessment of its facilities by the agency.

“As senators, we share a commitment to expanding and strengthening modern VA infrastructure in a way that meets our obligations to American veterans,” according to the senators’ joint statement. “We believe that the recommendations put forward [by the Asset and Infrastructure Review] Commission do not reflect this objective and would disadvantage rural and urban veterans, which is why we announce that this process does not have our support and will not go forward.

In May, Manchin, Rounds, Heinrich, and Capito introduced a bill, “Eliminating the VA Asset and Infrastructure Review Board,” which would eliminate the board. Thune, Lujan and Hassan are co-sponsors. The bill doesn’t say why they want to eliminate the commission, but the senators have voiced their opposition to recommendations to shut down the VA in their respective states.

The VA was required to establish the Asset and Infrastructure Review under the Maintaining Internal Systems and Strengthening Integrated External Networks Act of 2018, or MISSION Act. The review was designed to analyze the health care needs of veterans as well as the department’s infrastructure. That same year, Congress approved the creation of an Asset and Infrastructure Review Commission to work on the “upgrading or realignment” of VA properties.

The VA Facilities Review determined which facilities were underutilized, obsolete and should be closed, where to invest more resources, the demand for which services and the needs of veteran demographics in each market.

The VA released the commission’s report in March, which recommended facility closures and upgrades to provide better services to veteran patients in their respective markets across the country. The report lists 35 medical center closures. However, it is recommended that some closures be replaced with new buildings and, in some cases, other locations. Other medical centers have been asked to close permanently.

The VA report cited old and deteriorating buildings and an expected decrease in demand for VA services in areas where hospitals are suggested to be closed. Additionally, each market’s veteran population varied.

But two different independent reports examining the VA exam found the work to be deficient.

The VA’s Office of Inspector General and the Office of US Government Accountability in December and March, respectively, issued reports stating that the VA’s infrastructure recommendations were incomplete, inaccurate, and outdated.

VA Secretary Denis McDonough acknowledged the data was outdated during a House Veterans Affairs Committee hearing in April. He said he had the data reviewed by a team of health care experts and former senior VA officials.

“They came back with an answer that I feared, which is that they think the data is not up to date given the [coronavirus] pandemic,” McDonough told House lawmakers.

The senators, in their statement on Tuesday, said they believed that because the review was flawed, the commission was unnecessary.

“The commission is not needed for our continued efforts to invest in VA healthcare infrastructure, and together we remain committed to providing the department with the resources and tools it needs to continue providing quality care and deserved service to veterans in 21st century facilities – now and in the future,” according to the senators’ statement.

For this reason, the senators said they would not be proposing nominations to fill vacancies on the review board.

There were to be nine members on the review board. The White House and the VA provided five nominees for the commission. Four others are appointed to the committee by House and Senate leaders. The final nominee was announced on June 22.

“President Biden insisted that our 21st century veterans should not be forced to receive care in early 20th century buildings,” Bryant said. “The median age of VA hospitals is nearly 60, and that’s why the President asked for nearly $20 billion in new VA infrastructure spending last year and that’s why he asked largest investment ever made in VA infrastructure in its [fiscal 2023] budget. Whatever Congress decides to do with the AIR Commission, which was called for in the 2018 MISSION Act, we will continue to fight for the funding and modernization our veterans deserve.

The American Federation of Government Employees, a union of government employees representing VA workers, applauded the senators’ announcement to block nominations to the review board.

“We thank the committee for listening to the voices of veterans and front-line workers who mobilized for months against the approval of the VA’s recommendations to close veterans’ hospitals and send the heroes of our country in the private sector where they will pay more for the worse. results,” union president and Army veteran Everett Kelley said in a prepared statement.

But Sen. Jerry Moran of Kansas, the ranking Republican on the Senate Veterans Affairs Committee, said he was disappointed the committee was not holding confirmation hearings for commission nominees.

“Many VA facilities are empty, underutilized and severely outdated,” he said in a prepared statement Monday. “We passed the VA MISSION Act to address these issues, but by refusing to confirm the commissioners, we are essentially stopping the work of the AIR Commission and perhaps our only opportunity to resolve this long-standing issue.”

“The MISSION Act was signed into law with the broad support of lawmakers on both sides of the aisle and all major veteran service organizations,” he said. “She established an Asset and Infrastructure Review Process – or AIR – with nine Senate-confirmed commissioners to recommend updates to VA’s failing medical care infrastructure. This process is vital for the future. state-of-the-art VA care. It is wrong that these senators flatly refuse to even consider nominees put forward by the Biden administration. This decision does an immense disservice to veterans and VA staff who will feel its repercussions for years to come. come.”

What you need to know for Ohio’s August primary