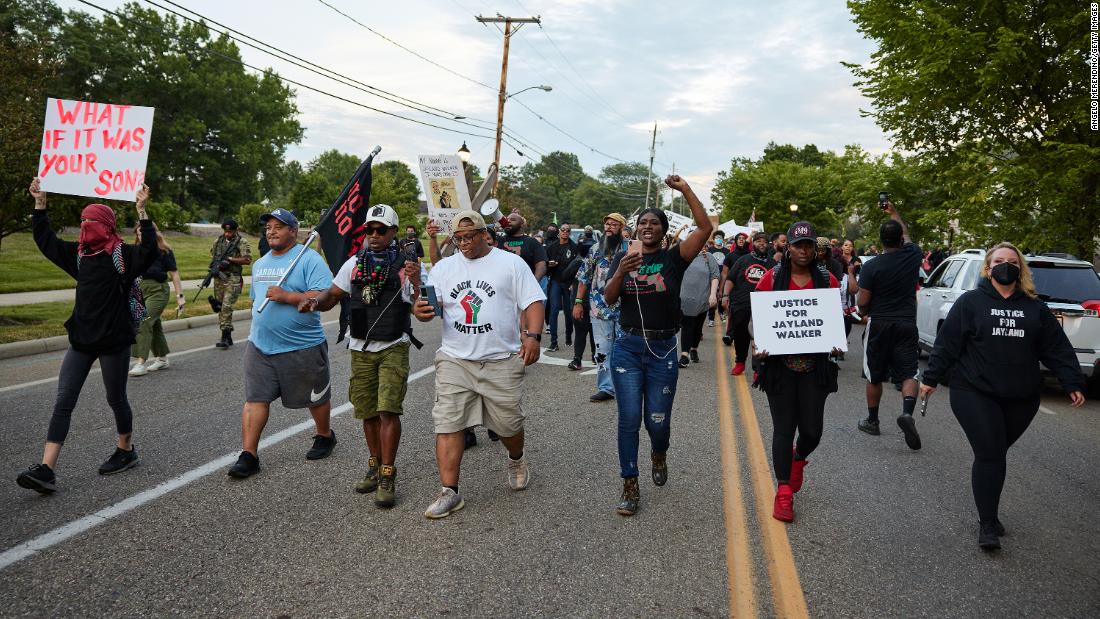 City officials said Monday the downtown curfew had been reduced after a week of largely peaceful protests over the killing of Walker, a 25-year-old black man who was shot dozens of times by eight Akron police officers. at the end of an 18 minute vehicle and on foot chase.

Horrigan said Monday that the curfew, which has gone through several iterations since body camera footage of the shooting became public on July 3, would be in effect from 11 p.m. to 5 a.m. starting that night.

He said on Saturday that he intended to lift it on Sunday morning. “The curfew will remain in place tonight and, barring any additional public safety concerns, the curfew will end tomorrow morning,” Horrigan said in a statement.

In at least one instance, the city used tear gas to disperse protesters. Walker’s family has continually called for non-violence from protesters and police.

Walker was shot on June 27 after fleeing what police said was a traffic control attempt. Walker was unarmed when he was killed, police chief Stephen Mylett said. A gun was found in his vehicle after the shooting, police said, and officers said Walker fired a gun from his vehicle during the car chase.

Eight officers directly involved in the shooting have been placed on paid administrative leave pending the outcome of the investigation, Mylett said.

An autopsy found Walker had 46 gunshot wounds or abrasions, Summit County Medical Examiner Dr. Lisa Kohler said Friday. His death was due to blood loss from his internal wounds and the cause of death was multiple gunshot wounds, Kohler said.

Tests revealed no evidence of drugs or alcohol in her system, she added.

Walker had his hands cuffed behind his back when his body arrived at the coroner’s office, according to photos from a preliminary report by a medical examiner reviewed by CNN.

Law enforcement experts say it’s common across the country to handcuff someone perceived to be dangerous and armed – even after they’ve been shot by police – so the person can’t access the weapons or pose another threat, CNN previously reported. However, Walker family attorney Bobby DiCello said the decision to handcuff Walker “sends a symbolic and inhumane message despite the procedure involved.”

Walker’s funeral was held Wednesday at the Civil Theater in Akron. Speakers called for peace in the streets, condemned the discriminatory state of policing in America and urged reinventing public safety. They recalled Walker’s life, his love of family, his zeal for life, his passion for music and basketball, and his aspiration to start his own business.

“We cannot make the death of our sons and daughters at such an early age a normal thing…We must not try to act like everything is fine. That is not right,” Bishop Timothy Clarke , pastor of the First Church of God in Columbus, told mourners at the funeral. “There’s nothing good about it. We shouldn’t be here. And Jayland shouldn’t be in this box.”

After being shot on the road, Ohio State’s Andre Wesson is ready for more