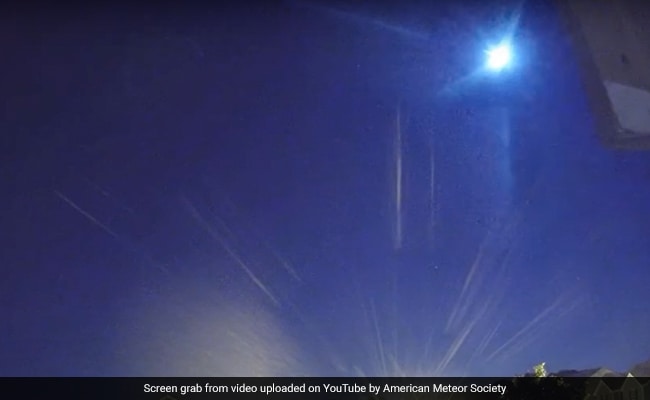 This fireball was a “random event” and was not associated with any meteor shower.

A spectacular fireball was seen Friday in several US states, including Indiana and Wisconsin. The American Meteor Society (AMS) shared video of the sighting and said it had received about 150 reports of the fireball.

According Newsweek, Robert Lunsford, fireball report coordinator for the AMS, advised that the flight of the fireball, which headed northeast, lasted between three and five seconds. The fireball entered the atmosphere over the town of Advance, Indiana, and disintegrated over the Burlington, Indiana area, according to AMS.

Take a look at the video below:

Additionally, the Meteor Society informed that reports of sightings came from Indiana, Alabama, Iowa, Wisconsin, Ohio, Missouri, Illinois, and Kentucky. Mr Lunsford reportedly said the fireball was most likely a ‘random event’ and not associated with any particular meteor shower.

“I’ve seen a lot of fireballs in this part of the sky, but this was by far the biggest so far,” a person who spotted the fireball in Ohio told AMS. Another eyewitness said: “I’ve never seen anything like what I just saw. It was beautiful, exciting and made me do some quick research and see who else might have see it too.” “All I know is that it was huge and amazing to see, even if it was only for a few seconds. Breathtaking!” third added.

Fireball is another term for a bright meteor. They are brighter than the average meteor because the space junk causing them is larger.

Meteors, also known as shooting stars, are the streak of light we see across the sky when asteroids or meteoroids enter Earth’s atmosphere at high speed and burn up in the process.

How long does a home COVID-19 test take?