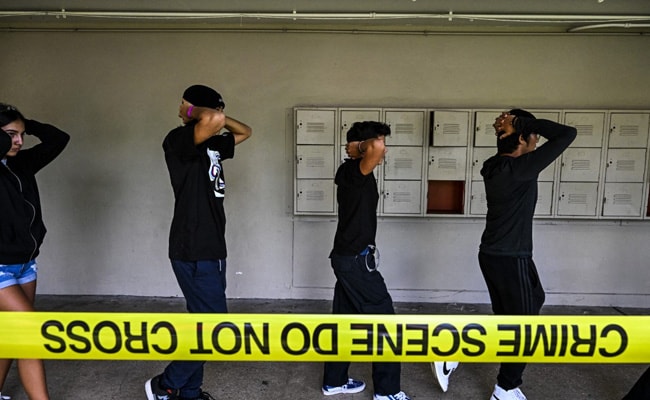 There is no U.S. federal guideline on police response to school shootings.

Gunshots ring out in a classroom at a Miami school. Inside, a dozen students, their clothes stained with what appears to be blood, are screaming desperately.

A security guard walks down the hall, more shots are heard, and a young man is quickly knocked down.

It’s a terrifying scene – but, thankfully, it’s a simulation. The bullets are blanks, and the blood and wounds are fake, as are the screams and the weapons carried by the dozens of police officers taking part.

The teens are volunteers helping police fine-tune their response to school shootings across the US, once again in the spotlight after law enforcement’s disastrous response to a deadly gun rampage in an elementary school in Uvalde, Texas in May.

“Our rule is that the first officer on the scene confronts the shooter. Everything is done to save lives,” said Maj. Carlos Fernandez of the Miami-Dade Schools Police Department.

It’s a rule of thumb that’s been in place for many police departments since two teenagers killed 13 people at a Columbine, Colorado, high school in 1999.

There is no U.S. federal guideline on police response to school shootings. But before Columbine, the norm was for officers to wait for tactical SWAT units to step in, Fernandez notes.

Afterwards, the priority became to stop the killing by rushing to the shots and engaging the shooter as soon as possible, before assisting the wounded – something Uvalde’s officers failed to do.

During the simulation in the Miami suburb of Hialeah, the false suspect is taken out of action just three minutes after the first shots are fired.

The street is swarming with police cars in front of the school, while officers run through the hallways and check that bathrooms and classrooms are empty.

With everything under control, firefighters enter the building and take out four students with fake injuries.

In the past, medical teams waited outside schools — but now police are trying to clear the facility as soon as possible so they can get in quickly, Fernandez says.

This simulation, in the middle of summer vacation, is for the police, not the students; and the 30 teenagers covered in bloody make-up and shouting at each other chose to be there.

But for the rest of the year, active-fire drills are required for public school students in at least 40 of the 50 U.S. states.

And that, say NGOs and trauma experts, can hurt students more than it helps – especially when drills approach realistic simulations like the one in Hialeah, with fake blood, injured victims and gunfire. fire.

They concluded that the exercises are linked to an increase in depression, stress, anxiety and physiological health problems in children as young as five years old, while worries about death also increased.

There is “almost no research affirming the value” of these drills in preventing shootings or keeping children safe when they occur, while evidence “suggests they cause lasting emotional and physical harm to students.” , teachers and the wider community. said Everytown.

Sandy Hook Promise, a nonprofit founded by some of those who lost loved ones in the 2012 Sandy Hook Elementary School shooting in Newtown, Connecticut, draws a line between safety drills such as lockdowns – which she says are “pretty scary” – and “live simulations of deadly shootouts.”

He warns of a “dangerous trend” towards simulations in schools which make exercises “more traumatic than useful”.

But when the drills are for police rather than students, it’s important that the drills are realistic and that children participate, says Miami-Dade Schools Police Chief Edwin Lopez.

“Our goal is to annoy the officers as much as possible. And that involves screaming students, fire alarms going off, smoke, noise, or actual gunfire,” he explains after the interview. Hialeah exercise.

“And it’s vital that children make a valuable contribution to our officers. Many of them give law enforcement the information they need on a daily basis to mitigate and prevent” shootings, he adds.

(Except for the title, this story has not been edited by NDTV staff and is published from a syndicated feed.)