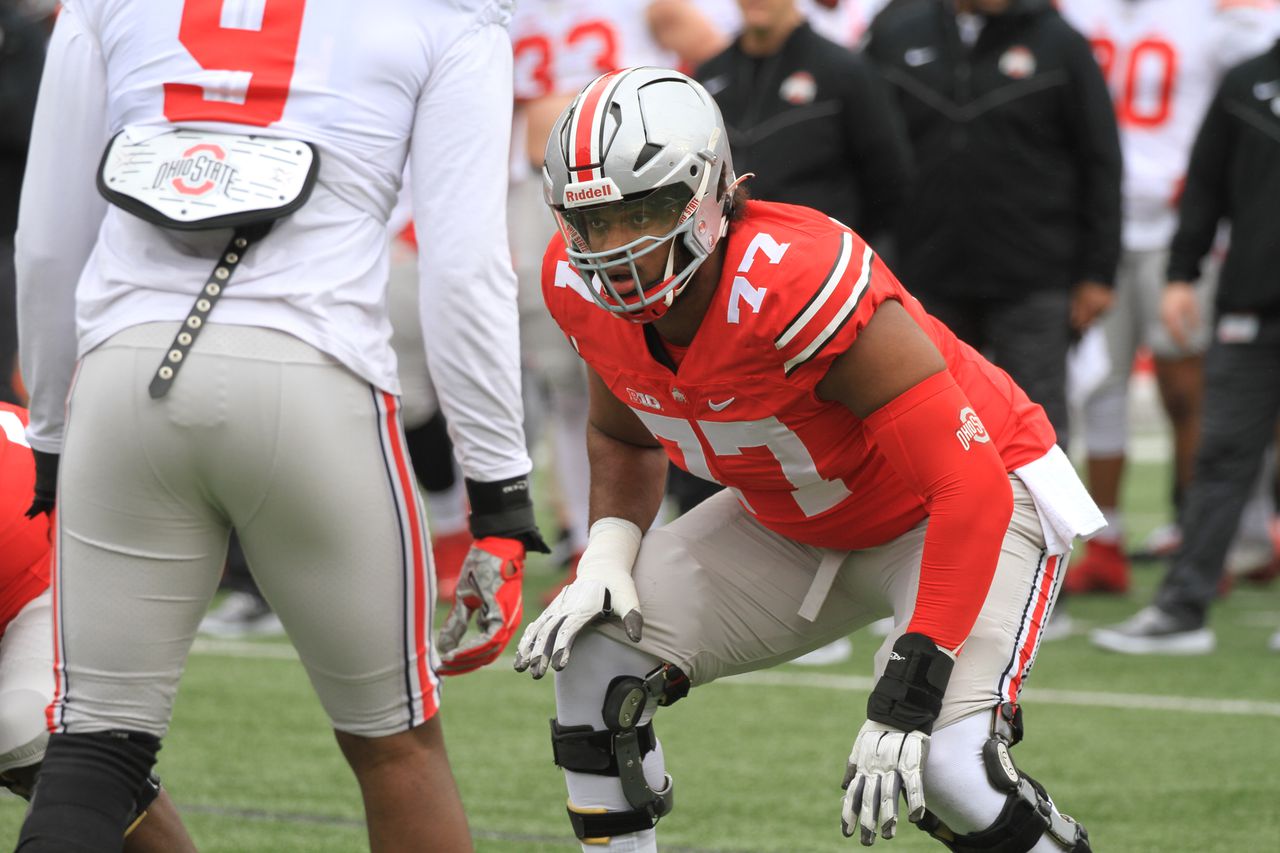 For the first time, the Ohio State Football junior offensive lineman is enjoying a preseason camp. The last two years, he “dreaded it”. His problem wasn’t the late morning heat or the monotony of the exercises. Other factors made him uneasy.

The COVID-19 pandemic nearly canceled its freshman year. As a sophomore, he spent camp cramming to learn a new position so he could start opening night. Johnson never felt the solid foundation needed to really attack preseason camp.

That changed last Thursday when he finally lined up at left tackle. He had been the Buckeyes’ blindside protector since his signing on June 28, 2018. The future has finally arrived, and Johnson’s mornings on the Woody Hayes Athletic Center practice grounds are different.

“So now I have the mindset to just ‘enjoy my day’ and I have that mindset, even during warm-ups.”

Back when Johnson committed to OSU, one could easily trace his timeline for the starting left tackle job. Worst-case scenario, he’d study Thayer Munford’s final year there as a rookie before taking over in 2021. After two full seasons anchoring the offensive line, he could head to the NFL with an armful of accolades.

Well, COVID has more than complicated Johnson’s first college offseason. It also prompted NCAA eligibility rules that opened the door for Munford to return last season, and he did. Then Dawand Jones pushed his way into the starting lineup, kicking Nicholas Petit-Frere to a left tackle and making Munford and Johnson the two guards.

Conventional wisdom said that this inside year would hamper Johnson’s development into an NFL-level left tackle. Early returns to camp suggest that may not be the case.

“It was really cool to see how he took the things he learned at right guard and moved to left tackle,” center Luke Wypler said.

“I think from a passing game perspective, you can see him now understanding, ‘OK, I have space. He’s big, strong and athletic and with him in space, it’s deadly.

Johnson said new offensive line coach Justin Frye came up with a plan to ease his transition to the outside. After an entire season at guard with help from each side, he now had to adapt to be the last bastion of straight quarterback CJ Stroud.

Ohio State‘s 2021 playoff hopes ended when it couldn’t fend off Michigan’s Aidan Hutchinson and David Ojabo enough. As offensive coordinator Kevin Wilson said in the spring, the 2022 season would be defined in part by how well OSU performs in its next matchup with the elite rushers.

“He pushes it all the way to the top,” Frye said. “He wants to be big. He wants to have all the information. He wants to put it all together.

“His biggest thing he’s learning right now – and he’s doing an amazing job – is like, ‘I don’t have to love searching for everything. Just work my way to the right answer, to the tools, the technical, whatever the front…. Because he wants to learn the way to get there, instead of being omniscient.

How much is Johnson enjoying pass protection drills right now? His face lights up when he describes it as being “like in high school”. His dominance for Cincinnati’s St. Xavier and Princeton at the time called him OSU’s best offensive line prospect since Orlando Pace — who is perhaps the best left tackle in college football history.

Against certain stares and in the face of particular passing moves, Johnson said his guard technique was practical and looked “really smooth.” On the other hand, he left behind the aggressive mindset he needed at guard.

“That patience is really crucial, and having a calm mind, so you can see it all,” Johnson said. “When you’re angry, when you’re aggressive, your vision is very narrow.”

Johnson entered preseason camp in the best headspace of his Buckeye career. He is enjoying the day. Opposing pass runners may not appreciate theirs.

Ohio State’s fastest linebacker? The Strongest ? The most intelligent ? The Buckeyes reveal answers in a crowded room

What’s the most interesting thing about Ohio State football’s linebackers?

What about the deep concerns of Jordan Hancock, Cam Martinez and Ohio State football at the cornerback position?

Does Ohio State football have the best tackling tandem in the country in Paris Johnson Jr. and Dawand Jones?