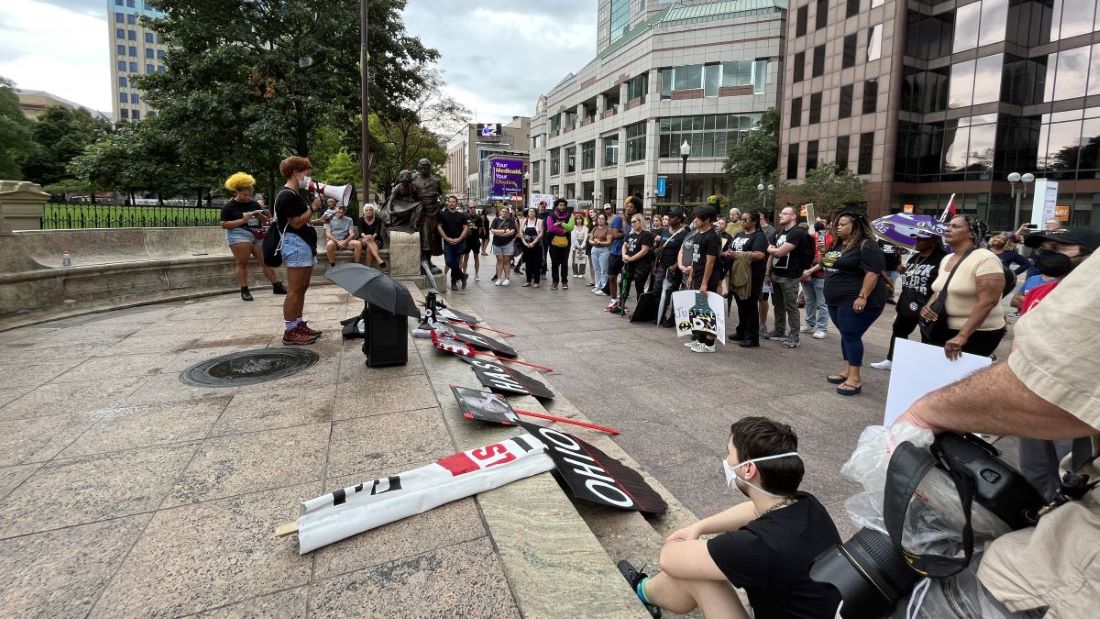 On the weekend of September 3, Columbus residents took to the streets to condemn the senseless murder of Donovan Lewis by Columbus police. The actions were organized by Justice, Unity and Social Transformation; the Downtowners and the Party for Socialism and Liberation, among other organizations.

Lewis was lying in bed at 2.30am on August 30 when police burst into his bedroom and shot him in the stomach before he had time to get up. Bodycam footage shows Lewis posed no threat to the CPD, but cops asked him to crawl on the ground after shooting him. When Lewis couldn’t, CPD handcuffed him. Shortly after, he was pronounced dead in hospital.

This act follows a series of shootings carried out by CPD; This is the third shooting involving CPD in the past two weeks and the sixth in 2022 alone.

Around 6 p.m. on September 2, around 250 people gathered outside the CPD headquarters, chanting “Say his name, Donovan Lewis” and “No justice, no peace”. At this event, family and friends of Lewis came to speak in memory of Lewis. They pointed out that Lewis was a great man who cared deeply for his community and those around him, and was a kind person who loved his siblings and parents. Lewis was also a musician and creative, sharing his beautiful art with those around him. Lewis didn’t deserve what happened to him, they pointed out.

Following these messages, everyone moved to the steps of the police station, rallying around Lewis’ family who stood at the top of the steps with a banner. Community members spoke about the larger systemic issues resulting from police brutality. Stakeholders also pointed out that the police do not have the interests of the community at heart. The police terrorize our communities and divert funds from important and vital resources like affordable housing and health care.

One speaker pointed out that he had voted every year of his life. Yet these problems of police brutality persist. Everyone who shared agreed that voting is not enough; and speakers also called for an end to qualified immunity. After these speeches, community members began marching behind a banner with the names of everyone killed by police terror in the state of Ohio since 2000, a list curated by Ohio Families Unite Against Police Brutality. Many protesters found the names of loved ones on the banner and took pictures with them.

The next day, September 3, more than 150 people gathered again to continue protesting the unjust murder of Lewis. Community organizers from Akron, Ohio, and as far away as Liverpool, England, came to Goodale Park in solidarity with the residents of Columbus. After listening to some of Lewis’ music, the speakers bore witness to the atrocities of police brutality in the United States. They denounced the media’s portrayal of Lewis as a delinquent and troubled man who deserved to die. It is clear that the mainstream media is denying the humanity of black people and the seriousness of the systemic issues that disproportionately afflict black people in the United States.

A community organizer from JUST spoke of the need for unity and community organizing against police brutality and the unjust structures of capitalism more than ever: “Power comes from unity within the community. We each have to play a role in breaking down these structures of the capitalist system. We have real aspirations to change things…I’m tired of seeing people’s names as hashtags…I’m tired as hell, but I’m still here because it matters.

After the speeches, people began marching toward the Ohio State University campus chanting “Indict! Sentenced! Send those killer cops to jail! The whole damn system is guilty as hell!” Community members caught the attention of many passers-by attending a football game, calling on them to action in response to Lewis’ murder. At the end of the march, people gathered again to share a few farewell words. Community organizers stressed the importance of everyone being present during these actions; each individual has something to contribute to the fight against police brutality, racism and capitalism.

The people of Columbus hosted one last time this weekend at the Ohio Statehouse on September 4. Attendees came out to show their solidarity with Lewis’s family, who stood in front of the crowd. The organizers listed the demands of the community:

State Representative and protester Latyna Humphrey said, “I’m here because I don’t believe in police brutality, terror or brutality. What happened a few days ago is completely unacceptable. I am here to support Mr. Lewis and the rest of my constituents who may have had a horrific connection to police brutality.

David Harewood, a community organizer, began the action with a personal anecdote about the impact of police brutality on his life: “I left the organization for the same reason I joined, which was between the pattern of a dodgy or outright murder by the CPD, all of the mostly black, mostly young, usually rear suspects were dying. [my friends] threw themselves into the river, Amber, I had to come back. The CPD would usually kill someone every three months, usually young, usually black, usually under 21… The pattern is they [CPD] cover up these murders. So it only remains for us to tell the story of this young man [Lewis] and how he was robbed of his life, despite the backdrop of the CPD killing people, usually young, usually black, usually in the back.

Afterwards, another speaker shared her personal connection to police brutality in Columbus: “In 1968, my mother’s father was murdered by the CPD. It was murder then, and now in 2022, it’s murder now… He [Lewis] did not have the ability to surrender to authorities or the ability to rehabilitate if that was the case…I believe in our people, I believe in our community, and I will fight for our right to stay in bed if it is which is what we choose to do.

Following these speeches, everyone marched several blocks down the street and around the perimeter of the Statehouse. People took to the streets and chanted “Black Lives Matter!” and “Justice for Donovan Lewis” despite the rainy and cloudy weather.

Ramon Obey II, an organizer of JUST, concluded the action with a new call for unity in the fight against police brutality, racism and capitalism: “We are building the community necessary to stand up against the structural racism to which we are facing. We can only do this by uniting. We all have a skill or talent that can be used in this fight. We are all necessary individuals in this fight. It’s the biggest movement that anyone can participate in. We can give five minutes to this movement that will save our lives in the long run.

The CPD has killed countless black people – Ma’Khia Bryant, Casey Goodson Jr., Andre Hill, Miles Jackson, Tire King – the list of victims is far too long. One of the community organizers captured the general sentiment of the weekend’s actions in a speech she wrote in honor of Lewis: “The basket of apples is rotten. The apples have rotted through the basket and the stench of their neglect is dripping down the feet of black youth… All the apples are rotten. Justice for Donovan.

Feature photo: Protesters demand justice after the police killing of Donovan Lewis in Columbus. picture of the release